By the time you read this, you will likely have Halloween plans. Or maybe you’re finalizing them now. Or maybe you’re going to just sit at home, like many of us, and hand out mini Snickers. By most accounts, this would be normal. What’s not normal is planning your Halloween by July, which is exactly what Mila Kunis has done.

The actress, whose first name is short for Milena, and I are speaking on a sweltering day in midsummer, a day so steamy I can’t imagine contemplating ghosts and jack-o’- lanterns or inhaling my kids’ candy stashes, which I would inevitably regret doing the next morning. But Halloween might just be Kunis’s favorite day of the year, so of course she has plans, she tells me, as if this were the most normal thing in the world.

“You have no idea what Halloween is in my family,” she says. “We do murder-mystery dinners at our house with a group of 10 to 20 people. It’s been a ritual for the past couple of years. Our parents come, but they don’t always participate; they think it’s crazy. We make a whole feast of food, and you dress up in your character … ”

“It is exactly, because we love Clue,” she says. “We think Clue is amazing. So it’s very similar to Clue. And [there are] different ways of playing the games, but it takes about four hours. And you know, we have mai tais and Ghoulish Goulash and crazy, stupid food, and we just sit around and play murder-mystery games.”

“Yes, Martha Stewart’s recipe. I’ll make it, or my boyfriend or my mom will. And the house is decorated — there are, like, fog machines everywhere,” she continues, words rushing out over themselves. “And we have a Halloween tree. We start decorating in September!” 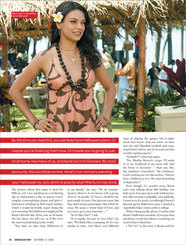 Even though it’s months away, Kunis can’t stop talking about this holiday, one that most of us gave up in mid-adolescence. Her effervescence is palpable, and suddenly, I want in on the party, even though I haven’t dressed up for Halloween since I donned a regrettable biker-chick outfit in college.

When I hang up the phone, I realize that Kunis’s Halloween anecdote, if you pay close attention, reveals just about everything you need to know about her:

• The “we” in the story is Kunis and her boyfriend of six years, Macaulay Culkin, of Home Alone fame. She refers to him often during the interview but never by name.

“Yeah,” she concurs at one point during our chat. “It’s 100 percent the American dream.”

TO understand how far Kunis has come, you have to rewind a bit to see where she’s been. She’s hesitant to exploit her parents’ background — “That’s their story, not mine,” she says — but she just as quickly concedes that it’s impossible to ignore how much their history has shaped her. “What my family went through in 1991 when we came to the States absolutely molded me into the person I am today,” she says.

Indeed, the mere fact that her life is the way it is today — with her hosting elaborate Halloween parties, tucked away in her Los Angeles home with her famous boyfriend, and poised to become an even bigger star than she already is with this month’s Max Payne — is somewhat of a small miracle.

“No parent — no adult — whom I’ve met who is Russian came here for themselves,” acknowledges Kunis. “They only came for their children. We were really well off, but we left everything behind because at that time, we were only allowed to come to the States with $250.” Her parents took odd jobs to pay the bills — her mother, a former teacher in the Ukraine, worked behind the counter at a drugstore; her father, previously a mechanical engineer, did everything from sell toilets to deliver pizzas — while Kunis went about the task of assimilating as best she could.

She pauses and then, trying to sum up the experience, says, “The opening statement of my essay for my college application was, ‘Imagine being blind and deaf at the age of seven.’ ”

Kunis means this only half metaphorically. She didn’t speak a word of English when her family immigrated. In fact, she says she’s blocked the second grade from her memory because the experience was so difficult. “If I talk to my parents, [they say that] I cried every day. I remember my mom telling me that my grandmother would come to school with me and bring kids chocolate to try to make them be friends with me. If a seven-year-old can go through a sort of depression, that’s probably what I went through for a year. But because I was so young, I was able to get out of it very fast.”

By the third grade, Kunis spoke English well enough to fit in. This was thanks in part to Bob Barker on The Price Is Right, whose manner of speaking helped her hone her language skills. By the fourth grade, she was fluent. (That she now does flawless voice-over work on Family Guy and Robot Chicken is all the more remarkable.)

That same year, her life shifted in another dramatic way. Her father enrolled her in acting classes. “To keep me preoccupied,” she says. “I talked a lot and had a lot of energy. My parents never wanted me to do this. They never pushed me, even when I was working. They were like, ‘Are you sure you want to do this?’ ”

In that very first acting class, Kunis met the woman who remains her manager to this day. “My parents told her, ‘Listen, we can’t afford head shots; we can’t afford anything. We can’t take her to auditions because we work full-time. And we can’t do this and we can’t do that.’ For one reason or another, being the crazy woman that she is, [my manager] said, ‘Don’t worry. I’ll fix everything,’ and she did. I ended up getting the first thing I went out for, which was a Barbie commercial. All my parents said was, ‘You can do whatever you want to do as long as you get A’s and stay in school.’ ”

Barbie commercials were just the launching pad. At 14, Kunis auditioned for That ’70s Show. Actors had to be at least 18 to be eligible for casting. She omitted the truth to the casting directors (lied is such a strong word), declaring that she’d be 18 on her birthday but neglecting to specify which year. Though they eventually picked up on the fib, the producers still thought Kunis was the best fit for the brash, sassy, and sexy role of Jackie. Over the next eight years, Kunis grew up in front of the eyes of millions.

But while we watched her on TV week after week, we know surprisingly little about her personal life. It’s no accident. “Every ounce of me tries not to be in the public eye,” she says. “My private life is superimportant to my family and me, and it’s not something that I want to ever jeopardize. But you know what? Everybody makes mistakes, whether you’re famous or not. I’ve made mistakes. It’s just that I think I’m better at making them in private.”

IN last April’s megahit Forgetting Sarah Marshall, Kunis managed an unthinkable feat — stealing the movie out from under the feet of Judd Apatow’s veteran band of comic players. This month, she tackles a very different kind of role, headlining Max Payne — based on the video game of the same name — opposite megastar Mark Wahlberg. “It’s slightly intentional,” she says of how she’s navigated her way through Hollywood. “I’m not Julia Roberts, with offers being thrown my way left and right, so you fight for the projects you think are right for you. I wanted to do Max Payne because after Sarah Marshall, working with Judd [Apatow] and Jonah [Hill] and Jason [Segel] and [director] Nick [Stoller] and everybody, how are you going to go make another comedy after that? When Max Payne came along, I was super-stoked to end up doing something where I got to kill people.” That’s right: As if the male population of the world didn’t need another reason to drool, in Payne, Kunis plays a billy-club-carrying tough chick.

So does Kunis fancy herself the next female action star, à la Jennifer Garner in Alias? “I wish,” she says. “I’m not out of shape per se, but no, I’m not in Jennifer Garner shape. But it was really fun to be a [tough] chick. The problem became being [tough] in five-inch heels. It’s not quite the same as kicking [butt] in sneakers. Your balance is off, and all of a sudden, you feel like an idiot walking up stairs. I’m barely coordinated on my two feet as it is, let alone with a 10-pound gun, a two-pound coat, and five-inch heels.

Even if she doesn’t (doubtful), I suspect she’ll still land on her feet, five-inch stilettos or not. That’s what’s remarkable about Kunis and her story. Not that it’s been a charmed life, or even a moderately easy one, but that as she makes her way through it — from the Ukraine to L.A., from unknown to celebrity — her foundation hasn’t shifted. She still keeps her family close, she proves herself loyal and asks the same in return from others, and she works hard and doesn’t take the life she’s earned for granted. Most importantly, she’s smart enough to trust herself and her instincts as she goes.

In an industry in which so much is measured by superficial, ephemeral factors, Kunis has chosen to live her life by her own measures of success. And that, truly, is the American dream her parents hoped for.